18/01/2022 -
358 Views
Currently, Vietnam’s power system is growing and growing, with tens of thousands of MW of consumption capacity, hundreds of power plants and thousands of substations at 500 kV and 220 kV power transmission levels. , 110 kV, the application of a high degree of automation in all stages of power generation, transmission, and distribution is imperative because the scale of the system has already exceeded human control and control. people, in order to ensure safe and reliable operation of electricity supply for the economy. In the following article, an expert of Vietnam Energy Magazine analyzes and evaluates the development steps of the automation system and recommends solutions to strengthen the application and development of automation technology for transmission substations. download, please introduce to readers. 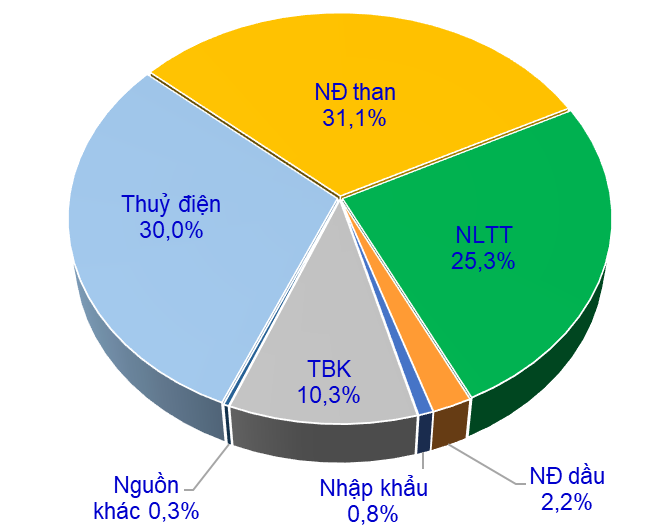 The power grid system is invested and upgraded every year with a large volume to meet the requirements of connection, capacity transmission of power sources, as well as improve the capacity of safe power supply when the electricity output is produced and imported. The total export value of the system in 2020 is 247.08 billion kWh. In which, by the end of 2020, the volume of the grid system that has been completed, built and is in operation, is as follows [2] [3] :

With the development of a large electrode system with a scale of tens of thousands of MW of consumption capacity, hundreds of power plants and thousands of substations at 500 kV, 220 kV, 110 kV power transmission levels, the application A high degree of automation in all stages of power generation, transmission, and distribution is a must because the scale of the system has exceeded human control and control. In Vietnam, the control and monitoring system in the power system in general and on the transmission grid in particular is evaluated as one of the largest-scale automation systems, with advanced intelligent technology in electrical systems. Large-scale industrial control system.

The protection systems in the TBA were the first automation systems in the power system and have been in development for more than 100 years. The protection system in the substation performs the function of protecting each device (for high cost equipment such as a transformer, or with a high probability of failure such as a power transmission line), or applying a group of devices ( such as containment devices, busbars). Highly automated (actuated) pre-programmed, programmable protection systems that interlock with each other for the purpose of selective action to protect equipment according to demand and can be connected together to form a large protection network, meeting the requirements of increasing security for the power transmission system.

2/ System of data collection and operation monitoring in TBA:

The need to monitor the operation in substations gave rise to the operation data collection system in the substation since the 70s of the last century, by the introduction of monitoring meters into the control room cabinets and after then put on the computers on the console in the TBA and the operation monitoring centers.

In parallel with the commissioning of the TBA monitoring system, the TBA control system was also put into operation. The advanced level of the control system is assessed as having a decisive role in the automation level of the TBA. Before the 60s of the last century, the control of equipment in the TBA was done directly on the devices, then it was gradually introduced on the panels in the control room and when the commercial PC appeared, it was done on the computer. calculator. The device control function, or device group in the TBA is implemented right on the Relay device protector, or can be separated into a separate controller The BCU is a pre-programmed industrial computer to control and data collection of devices in the TBA.

In addition, important equipment in the substation (such as transformers) is automatically controlled and protected by many different protectors and controllers that may have identical functions, or perform different functions. different protections.

Along with the development of computer systems and computer transmission networks, the TBA data acquisition, monitoring and control system was integrated into a common supervisory control system called SCADA (Supervisory Control and Data). Acquisition). After more than 40 years of developing SCADA system, many different automation technologies are applied and connected together into a unified control system in the entire power system.

An important component of the SCADA system is control software running on computers that allows displaying data, storing and using historical data, and controlling monitoring devices on the HMI computer screen. .

A small control network (such as small hydroelectric plants or small substations) may use only 1 computer. In transmission substations, due to the need for system security and the application of high automation technology, the components participating in the SCADA system controlling the substation often apply the 1+1 configuration, applying a single system. main operating system and an independent hot backup system to replace in case of failure on the main system. The TBA control systems are linked with each other and collect data centrally located in centralized control centers/dispatch centers to serve data collection and control monitoring of the entire transmission system. electricity.

In the components of the SCADA control system, there are many small automatic systems that operate independently such as monitoring and fault locating systems, allowing to record and identify the element that occurs, to locate the exact location of the fault. fault location, or independent component monitoring systems of the equipment (such as operational monitoring of transformers, online oil monitoring in transformers, OLTC tap control systems, power discharge systems/ frequency load…) allows monitoring the operating status of the equipment, giving warnings when anomalies, errors, or direct impacts occur for the purpose of protecting equipment and preventing malfunctions. try to spread in the power system.

The power metering systems in the substation are built with the aim of accurately determining the electricity delivered and delivered between the units involved in the operation of the power system. Power metering systems are prioritized to use measuring devices with the highest accuracy. Since the 200s, people have begun to build a Smart Metering data collection system that works independently of the SCADA control system and is one of the important components of the Smart Grid program. Smart Metering is an important input for analysis, evaluation, and application of Smart Grid components to the power transmission system and the entire Vietnamese power system.

6/ Automated systems related to the process of digital transformation of electrical systems:

Currently, the industrial revolution 4.0 is making rapid progress, leading to major changes in management, monitoring, control and automation models in the power transmission substation. A series of digital conversion programs in the automation control system are being implemented including:

– Digitally simulate all activities of the substation in particular and the power transmission system in general.

– Building a geographic information system (GIS) for the transmission network.

In addition to the current digital transformation programs for power transmission, the Smart Grid program also brings about the development of automation technology in the substation, specifically:

– Equip fault locator (FR) and fault locating systems in substations with the aim of reducing the time to find, identify and recover from an incident.

Over the years, Vietnam’s power transmission system has been applying many advanced automation technologies including [3] :

2/ The transmission system applies the latest technologies in control and connects the SCADA control computer system as required to apply IEDs (Intelligent Electronic Devices) in accordance with IEC 61850 , TBA data connection with Dispatch Centers according to IEC Standard 60870-5. 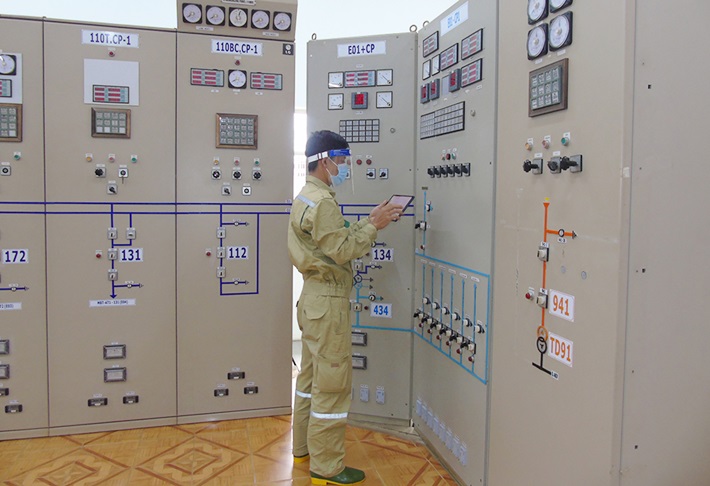 The operator of Bao Loc 220 kV substation records parameters by IPAD at the existing operating room.

Contents that need to be deployed to promote the automation system in the transmission substation:

Although in recent years (especially the last 15 years), EVN and EVNNPT have paid great attention to technology improvement, increasing automation in the transmission system to increase labor productivity; at the same time, the automation of the transmission substation has basically met the reliability and safety of the power supply operation, well serving the goal of ensuring energy security and the basic elements of the electricity market. However, with the increasing amount of investment in construction and development in terms of the scale of the power system, there are technical issues that EVNNPT must continue to implement methodically, persistently, selectively, and prioritize. each stage the following solutions:

Firstly: Well manage and control the new design, renovation and upgrading of substations in strict compliance with the Regulations on the design of 110 – 500 kV power grid projects in EVN (part of the substations). transformers with voltage levels from 220 kV to 500 kV) issued under Decision No. 1289 QD-EVN dated November 1, 2017 of EVN.

Second: Finalize the issued standards and continue to promulgate sets of standards on basic technical specifications of electrical equipment installed on transmission substations.

Fifth: Expeditiously complete and put into application the technical management (including incident management) of the power transmission system on the basis of a geographic information system (GIS) with wide application of intelligence. artificial processing of data analysis, images in inspection, operation of lines, substations, especially operation of unmanned substations.

Currently, the Vietnamese power system has an increasingly large number of components that need to be controlled and monitored at the National Dispatch Center and the Regional Dispatchment Centers, with 448 power plants and 1,002 substations. voltage (183 transmission stations 500 and 220 kV, 819 stations 110 kV). According to the Electricity Master Plan VIII, the number of power transmission substations is increasing sharply, requiring automation technology to have new developments, in the direction of becoming smarter and following the trend of digital technology as described in the analysis. accumulation above.

Therefore, in parallel with prioritizing equipment with modern and standard automation equipment technologies, in our opinion, the strengthening of digital management capacity training for technical staff and The management team of EVNNPT to meet working requirements during the implementation of digital transformation will determine the level of success in the construction and management of the power system to meet the needs of safe and reliable operation, ensuring ensure a stable power supply for the economy.

Next period: Applying integrated control technology – the core in the development of automation system for power transmission substations in Vietnam

[2] EVN’s report on the implementation of the electricity development master plan for the period 2011-2020- report to the National Assembly Economic Committee (Document serving the explanation session “The current situation, development solutions power to 2030 to meet the requirements of socio-economic development”).

[2] EVNNPT- REPORT Analyze and evaluate the implementation of the 5-year production, business and development plan for the 2016-2020 period and solutions to overcome it to ensure the completion of the plan in the next period of EVNNPT (March 22). 2021

[3] EVNNPT-TECHNICAL BOARD – REPORT Summarizing the operation in 2020 and implementing solutions to ensure the operation of the transmission grid in 2021 (December 15, 2020)